Apple, please do not do eBooks.

Because you've just shown that you can't handle comic books!

Recently I raved about a revolutionary new program called Comic Reader. This program was to be used to premiere a comic book called Murderdrome.

From the title alone, you expect it not to be all bunnies and unicorns and rainbows.

But this is a comic book. A work of drawing and word balloons. It is imaginary. It is fiction.

It was submitted to the Apple App Store and the publishers received notice that it was being rejected for violating terms of the Software Developer Kit which states:

Applications must not contain any obscene, pornographic, offensive or defamatory content or materials of any kind (text, graphics, images, photographs, etc.), or other content or materials that in Apple's reasonable judgement may be found objectionable by iPhone or iPod touch users.

Apple has just banned a book.

I've been one of the earliest and loudest advocates for Apple to enter eBooks (see For The Record: Apple and eBooks). I believed that Apple would legitimize them in a way the Sony Reader hasn't and go beyond the minor ripple Amazon's Kindle has managed to create. With a base of millions and millions of potential reading devices out there -- iPhone and iPod Touch -- Apple would have an advantage no other company has yet enjoyed.

But now Apple has acted in a manner that is absolutely toxic to the process of publishing.

Infurious Comics, to plead its case, has eschewed the income they would have derived from selling the first issue of Murderdrome by placing the entire collection of panels on their site for everyone to read for free. Go look at it. Right now. Then come back.

1) mj just this week pointed out an entire list of movies that Apple currently offers without any ratings attached to them. One of these movies I think most people will be familiar with: Reservoir Dogs. Remember that shocking scene with the cop tied to a chair being worked over by one of the criminals with a straight razor? Apple offers that with no rating advisory.

Here, look. This is the American iTunes Store listing for Reservoir Dogs: 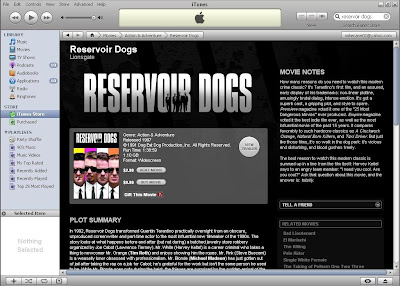 There is no rating.

And oh yes, I'm going to stick it right in your face, that scene. Because you need it for comparison purposes later on. So watch it right now.

2) Here is the listing for one of the other movies people who bought Reservoir Dogs also got, Lock, Stock, and Two Smoking Barrels: 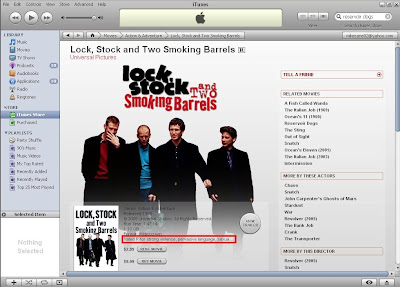 Someone could argue, "Well, it's an oversight." But how long has this alleged "oversight" been going on? I don't know if the iTunes Store can restrict purchases based on age, but if they can, hey, this -- and the entire list mj has posted -- has somehow slipped through. That's a pretty big slip-through!

That went out as general-audience entertainment here in America. I don't think it got anything other than a TV-G (General Audiences) rating. Yet it illustrates a dismembering and a beheading!

Oh, you argue, it's just a cartoon!

So is Murderdrome! These are two of the worst panels in it: 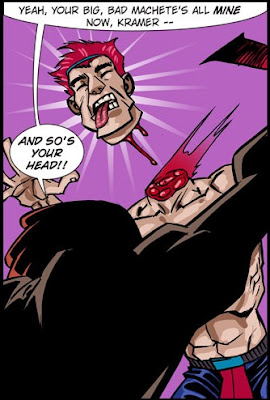 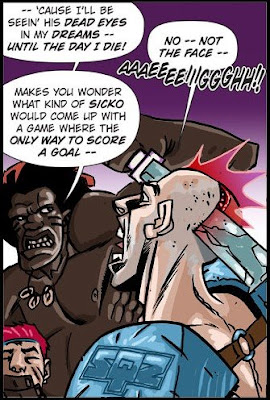 The difference between Murderdrome and The Simpsons: Murderdrome is not presenting anything as comedy. Its explicitness is to drive home a point: the brutality of the system in which the prisoners have been placed to compete. It is a futuristic gladiator competition. (I'm not privy to the entire story; all I've seen is what everyone has seen, but I'd bet real money that ensuing chapters will be making points about punishment, justice, and character that you won't find in Itchy & Scratchy!)

4) If Apple's move is designed to "protect the children," then Apple doesn't know what "the children" are up to these days. Look at this:

Hello. The kid has a gun. And how is it he's imitating a scene from a movie he is prohibited from seeing by its rating? Apple, could he have seen it via the iTunes Store?

5) How cognizant is Apple of the general-audience pop culture out there? Here is a compilation of Itchy & Scratchy:

Just how much brutality has been shown on The Simpsons? I go to the authority: South Park. 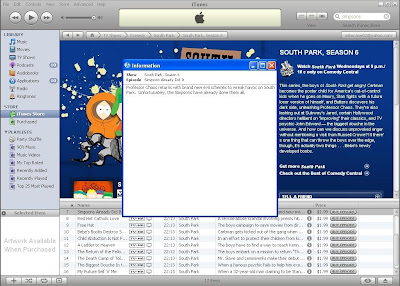 Here's a description of an episode carried on the iTunes Store:

Apple banning the Murderdrome comic book does not bode well for Apple possibly handling eBooks in the future.

7) Who at Apple has been set up to vet material? Specifically, why was Murderdrome vetted as an application and not as a publication? Apple has a Books category in the App Store. That's where Murderdrome should have been placed.

8) Does this Appointed Guardian at Apple have any idea how comic books have progressed? They're no longer this: 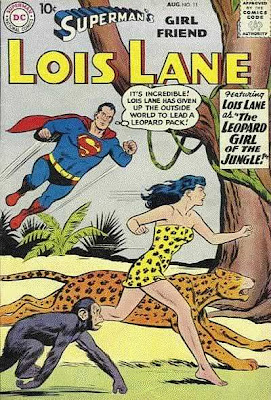 Even that Appointed Guardian at Apple must have heard there's a big movie coming out next year called Watchmen. It's based on a comic book. What would Apple have done if Watchmen had been submitted to it today, with it being a brand-new thing without the history and status it now enjoys? Would the Appointed Guardian have objected to the violence? Like this scene: 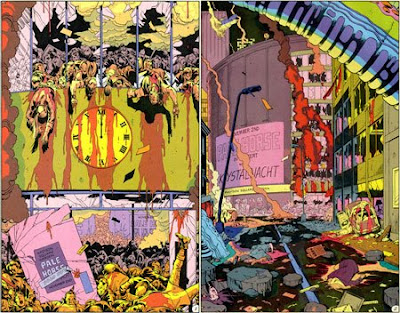 Oh, but wait. Apple actually offers a version of the comic book Watchmen! 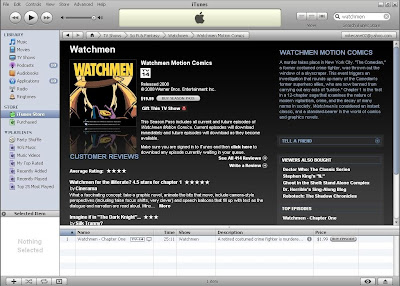 It's under TV Shows! How does that happen?

It's evident that Apple has yet to sort out what its stance is on several issues. Properly rating movies, for one thing. How to handle publications that are wrapped in applications. The left hand of one part of the iTunes Store knowing what the right hand is being asked to approve for the App Store.

These are issues that have to be sorted out right now. Aside from Murderdrome, there is another publisher about to offer comic books on the App Store: iVerse. They have to be wondering what Apple's standards precisely are. I have to wonder now if Apple's banning of Murderdrome has a sent chilling shot across their bow.

Every single writer in the world is watching you right now, Apple.

Your problems with MobileMe and iPhone 3G reception issues are minor compared to this.

eBooks are the future. You are at the nexus of downloadable content and millions of consumers. Are you telling all of us that you intend to stand between us and every possible publication, permitting only your vision of the future to be offered for sale?

If that's going to be the case, you've just handed the eBook ball to Google and Android.

And Jeff Bezos over at Amazon must be breathing a great sigh of relief right now too -- when he isn't busy laughing at you.

As for me and every other writer who's been waiting for you to jump into eBooks and free us from an industry frozen in the 19th-century, let's just say we are not pleased.

And you absolutely do not want to displease writers, Apple. No, you do not.

Murderdrome BANNED by Apple
They Ban Comics, Don’t They?
Lying in the Gutters Volume 2 Column 172 (scroll down)
Posted by Mike Cane at 4:05 PM